Ho Vinh Cassey better known as Cassey Ho is a Chinese-Vietnamese American social-fitness entrepreneur and YouTube vlogger. She is best known for her website blogilates.com and YouTube channel of the same name where she has 5.51 million subscribers.

Receiver of the Shorty Award she was placed in Time magazine’s 2017 list of “The 25 Most Influential People on the Internet” and on Forbes’ Top Influencers – Fitness 2017.

She was born on the 16th of January in 1987 in Los Angeles, California. Currently 34 years of age she is the daughter of Cuu Ho and Bach Ho and has a sister called Jackelyn, who is by profession a yoga instructor.

She is of American nationality while her ethnicity is mixed comprising of Chines, Vietnamese, and American.

Ho graduated from the institution with a Bachelor of Science in Biology in 2009. 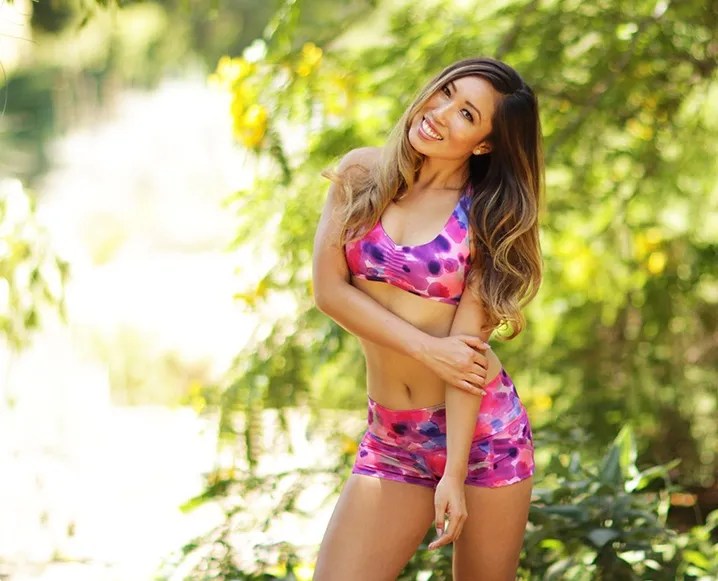 As a teenager she started a bakery named “Cooplex Cookies & Candies” along with her mother, a business venture which lasted from 2001 to 2005. In 2003, Cassey became the winner of the San Fransisco Miss Teen Chinatown.

Ho was amongst the 18 winning designers to be featured on Emerging Stars; a fashion show held at San Fransisco Fashion Week in 2007.

Cassey claims that her career reached great height when herbag was featured in the Shape magazine in 2010. Her designs have also been featured in Fitness Magazine and The Wendy Williams Show.

Cassey Ho stepped into YouTube in 2009 after she decide to shift to Boston from Los Angeles as a fashion buyer. Her first video was titled POP Pilates: Total Body Sculpt Video. Her workout videos are fused with pop music, making them a fun process.

As of 2021 she has uploaded 780 videos on her channel and has over 5.51 m subscribers. Her YouTube channel Blogilates is amongst the most successful fitness YouTube channel.

As an entrepreneur she started her own clothing company in August 2014 named Bodypop. Later in January 2016, she launched the 1st collection of her new line named Popflex.

She is married woman and is in relationship with her long-term boyfriend Sam Livits. The couple were engaged on 22nd August 2017 in Kauai, Hawaii. They married on 6th October 2018 at The Solomon Estate in California.

Cassey Ho’s Net Worth and Earnings

The Streamy Awards winner has an estimated net worth of $6 million which she made from career as an online fitness trainer and from her clothing line.

According to Socialblade, Cassey Ho earns an estimated $1.8k-$28.9k monthly from her YouTube channel Blogilates, which amounts to $21.6k-$346.3k a year.

Furthermore, she is believed to earn between $4,023-$6,705 from every post on Instagram where she over 2 million followers.

The American fitness instructor has an average height of 5 feet 5 inches and her body measurements are 34-24-32 inches.